With a reflection by ​the Bishop of Whitby
the Rt. Rev.d Paul Ferguson​

The Collect
Grant, we pray, almighty God,
that as we believe your only begotten Son
our Lord Jesus Christ to have ascended into the heavens,
so we in heart and mind may also ascend
and with him continually dwell;
who is alive and reigns with you,
in the unity of the Holy Spirit, one God,
now and for ever.
Amen
A reading from the Acts of the Apostles 1.1-11

“In my former book, Theophilus, I wrote about all that Jesus began to do and to teach until the day he was taken up to heaven, after giving instructions through the Holy Spirit to the apostles he had chosen. After his suffering, he presented himself to them and gave many convincing proofs that he was alive. He appeared to them over a period of forty days and spoke about the kingdom of God.While staying with them, he ordered them not to leave Jerusalem, but to wait there for the promise of the Father. ‘This’, he said, ‘is what you have heard from me; for John baptized with water, but you will be baptized with the Holy Spirit not many days from now. ’So when they had come together, they asked him, ‘Lord, is this the time when you will restore the kingdom to Israel? ’He replied, ‘It is not for you to know the times or periods that the Father has set by his own authority. But you will receive power when the Holy Spirit has come upon you; and you will be my witnesses in Jerusalem, in all Judea and Samaria, and to the ends of the earth. ’When he had said this, as they were watching, he was lifted up, and a cloud took him out of their sight. While he was going and they were gazing up towards heaven, suddenly two men in white robes stood by them. They said, ‘Men of Galilee, why do you stand looking up towards heaven? This Jesus, who has been taken up from you into heaven, will come in the same way as you saw him go into heaven.“ ’

Alleluia. Christ is risen:   He is risen indeed. Alleluia.
A reading from Paul’s Epistle to the Ephesians  1.15-end

I have heard of your faith in the Lord Jesus and your love towards all the saints, and for this reason I do not cease to give thanks for you as I remember you in my prayers. I pray that the God of our Lord Jesus Christ, the Father of glory, may give you a spirit of wisdom and revelation as you come to know him, so that, with the eyes of your heart enlightened, you may know what is the hope to which he has called you, what are the riches of his glorious inheritance among the saints, and what is the immeasurable greatness of his power for us who believe, according to the working of his great power. God put this power to work in Christ when he raised him from the dead and seated him at his right hand in the heavenly places, far above all rule and authority and power and dominion, and above every name that is named, not only in this age but also in the age to come. And he has put all things under his feet and has made him the head over all things for the church, which is his body, the fullness of him who fills all in all.

This is the Word of the Lord: Thanks be to God
The Holy Gospel according to Luke  24.44-end

​Then Jesus  said to them, ‘These are my words that I spoke to you while I was still with you—that everything written about me in the law of Moses, the prophets, and the psalms must be fulfilled.’ Then he opened their minds to understand the scriptures, and he said to them, ‘Thus it is written, that the Messiah is to suffer and to rise from the dead on the third day, and that repentance and forgiveness of sins is to be proclaimed in his name to all nations, beginning from Jerusalem. You are witnesses of these things. And see, I am sending upon you what my Father promised; so stay here in the city until you have been clothed with power from on high.’

Then he led them out as far as Bethany, and, lifting up his hands, he blessed them. While he was blessing them, he withdrew from them and was carried up into heaven. And they worshipped him, and returned to Jerusalem with great joy; and they were continually in the temple blessing God.

​As we come to Ascension Day, we might ask ourselves what it is that we are actually celebrating.
Of course some of the words we use can make us uncomfortable.  The words in the Creed, ‘he came down from heaven’, can suggest an ‘up’ where God is and a ‘down’ where humanity is, and ‘Ascension’ can carry the idea of Jesus going ‘back up’.  We could let ourselves be embarrassed about this language, knowing as we do now that ‘up’ and ‘down’ mean nothing as far as the physical layout of the universe is concerned.  But we needn’t be.  The New Testament writers — Luke especially — were describing something unique, beyond any other experience, and it is no surprise that human language is being pushed to its limit.

The New Testament makes it clear that Jesus appeared alive after his resurrection:  there wasn’t a body left in his tomb, but neither was he brought back or resuscitated to the same life as before.  Jesus, in his resurrection, is the same Jesus, but he is now living a different life — and the writers show us this by the way the risen Jesus is not always recognised, and the way in which he can be seen and then not.
​
Today, Ascension Day, we mark the end of those resurrection appearances of Jesus.  He is parted from the disciples:  a parting, we could say, with a threefold purpose.
So much for what we are marking today from the Bible:  but what does it have to do with us?  Those same three purposes each touch our own lives and our calling very closely.
This is a day of joy and excitement, but also of challenge.  It draws together so many themes of what the Christian faith is about.  I do hope that you have a wonderful day of celebration. 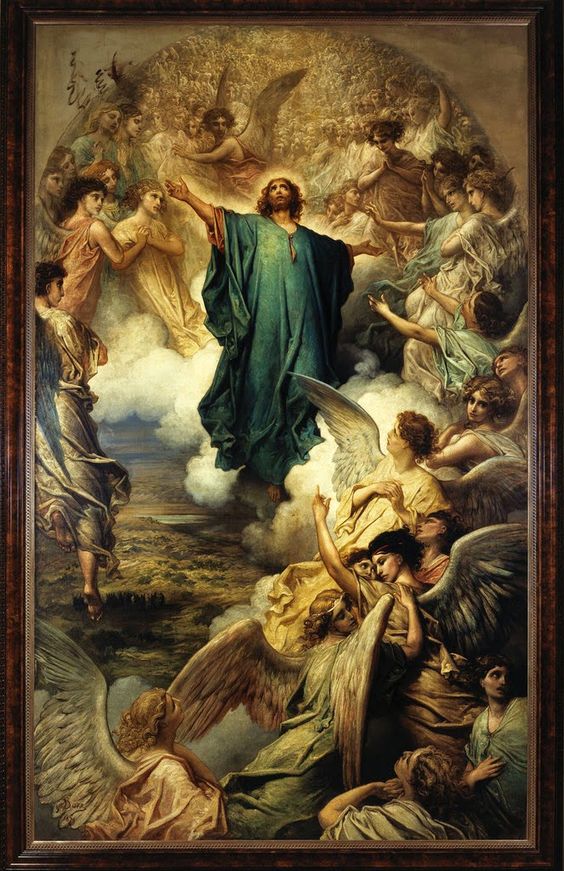