St. Peter and St. Paul's Church, Pickering
Click below for a 360 degree view of the wall paintings, kindly created by nikreations.
360 view

The medieval wall paintings, which give our church its fame, were probably first commissioned in 1450, and were painted the following decade, as details in the costumes and armour of some of the figures makes clear. Nikolaus Pevsner, the renowned expert on architectural history said that ‘This is one of the most complete set of wall paintings… and they give one a vivid idea of what ecclesiastical interiors were really like’. They are in fact one of about five sets of such extensive wall paintings still in existence in the country. The images vary in scale and in what they depict: some are large single figures; others tell stories. Details of each scene are given in the guidebook, available from the Church bookstall.

During the course of repair work in 1852, the nave wall paintings came to light, although others had been seen - and destroyed - in the transepts and possibly the chancel by the Vicar at the time, Revd John Ponsonby. These included a Doom, possibly in the north transept and the Last Supper on the north wall of the chancel. Ponsonby was a conservative cleric who was horrified by the Catholic imagery of the paintings, and ordered them to be re-whitewashed, against the instructions of the Archbishop of York and much to the dismay of his parishioners and antiquarians.

A major restoration of the church was carried out by the Revd George Herbert Lightfoot at a cost of £7000 in the 1870s, completed in 1879. The architect was Joseph Stretch Crowther from Manchester, although advice on underpinning the tower was given by George Gilbert Scott. Extensive works were carried out including the rebuilding of the transepts, replacement of pews and removal of galleries in the north transept and at the west end, installation of new heating systems and organ and restoration of the chancel by the church commissioners.

In 1882, Lightfoot embarked on the restoration of the paintings.  Sadly, the original pigments of the medieval paintings had been damaged beyond repair and he decided to repaint the entire scheme with the help of the artist, Edward Holmes Jewitt. Analysis of the paintings and surviving records reveals that although some details were added, the iconography of the paintings was not altered. However, the paintings were coated with a preservative treatment which was disastrous for them. Cleaning and conservation work was carried out in the 1930s by the great wall painting expert, Ernest William Tristram, and in 1951-3 by his student, E. Clive Rouse, who returned again in 1965-70 to carry out further conservation cleaning and consolidation.

The wall paintings
Pickering's wall paintings are a fascinating example of what many churches looked like in the middle ages, ablaze with colour, gilding, statues and candles. Churches would have been repainted every century or so, as different patrons and painters came up with new designs which reflected their devotional practices and affection for their building. Because these paintings often featured images of the saints, they were gradually removed over the course of the 16' century, during the English Reformation, from the 1540s onwards. Initially covered with layers of whitewash, they gradually disappeared from view, to be replaced by texts of the ten commandments or funerary monuments.

During the 19th century, the restoration of churches often destroyed schemes of paintings that were never recorded, either because plaster was completely stripped from walls, or, as at Pickering, because of concerns about their 'Catholic' nature. Gradually, attitudes changed, thanks to the work of organisations such as the S.P.A.B. and an emerging scholarship on medieval wall paintings which was part of an international movement to study the so-called 'Primitive' precursors of native artistic traditions.

When they were first re-discovered in 1852, Pickering's scheme attracted the attention not just of local antiquarians but also national experts from London. Drawings and descriptions were made of the paintings, a few of which survive and help us understand what was seen, before the Revd John Ponsonby ordered them to be whitewashed over again, much to the disappointment of parishioners and antiquarians alike. Their restoration in the 1880s took ten years and painstaking work by the Revd George Herbert Lightfoot and the artist Edward Holmes Jewitt, of Shrigley & Hunt. You can see his pre-Raphaelite approach to lost details particularly clearly in the lower sections of Edmund and Catherine.

The paintings are the subject of a forthcoming book by Dr Kate Giles of the University of York, but here are a few notes which have formed the subject of her talks and tours.

What date are the paintings?
Originally the paintings were thought to date to 1450 but they have been redated to 1470 thanks to advice from the Royal Armouries about the details of the armour in the Becket scene.

Who paid for the paintings?
Given their location in the nave, these paintings were probably paid for by the laity, the ordinary people of Pickering. A key group must have been the guild of the Blessed Virgin Mary, for which there are surviving reterences, and Which existed right up to the Reformation.

Who painted them and what were they painted with?
The painters were probably an itinerant group of craftsmen working across the churches, monasteries and houses of North Yorkshire. They may have been connected to the craft of Painters in York, who produced the Crucifixion play in the great cycle of Mystery Plays. There are no surviving records of the commission, sadly, and very few other schemes survive in the area, although fragments can be seen at Bedale, Easby and Rillington churches and in the vicarage at Coxwold.

The paintings were painted directly onto a lime wash using earth pigments such as red and yellow ochre, charcoal and lime and lead pigments such as green and blue verditer. These could have been ground into a tempera oil medium, using organics such as egg, casein made from sour milk, or size, and mixed in oyster shells or pottery 'tygs'. The paint was applied using brushes made from hogs' hair or badger bristle using the secco method, directly onto the dry plaster. True frescoes in damp English churches are rare!

What do the paintings depict?
One of the most striking aspects of Pickering's scheme is the distinction between the subject matter of the north and south walls of the nave. The surviving images on the north wall are male saints who were martyred for their faith.

​The North wall from the west (left hand end) depicts:
St. George and the dragon and St. Christopher and the hermit
This is a very common combination, and these are two of the most popular saints of the period because of the belief that they could protect the viewer from disease, sudden death and misfortune. St. George was also the patron saint of England, and his martial qualities may have appealed to a North Yorkshire community including the guild of St. Mary, as he was known as 'the Virgin's knight'. To benefit from St. Christopher's protection, it was essential to see the saint. There's a great view of both saints through the church door.

St. John the Baptist
St. John the Baptist was a different kind of role model, closely associated with baptism. His martyrdom story is shown as a cartoon, starting on the right of the scene, with St. John the Baptist berating Herod for marrying his brother's wife, Herodias, whilst Salome ‘tumbles' on the floor. It then moves to the tier below, which depicts the beheading (or decollation of the saint, and then back to the culmination of the story, where the head is presented by Salome to Herod at a continuation of the feasting table

The Virgin
Uniting the north and south walls was the image of the Funeral, Assumption and Coronation of the Virgin. Her funeral and Assumption into Heaven is shown on the south wall, making clever use of the vertical axis of the wall to associate her disappearance into heaven, with a view of the sky through the glass, and her Coronation by the Trinity surrounded by the saints and residents of Heaven opposite them on the north wall. These images were probably paid for by the guild of the Virgin.

St. Thomas Becket and St. Edmund
Archbishop Thomas Becket (1120-1170) was a highly popular saint in the later Middle Ages, with a major centre of pilgrimage at Canterbury. At Pickering, Becket's biographer, the chaplain Edward Grim, is shown pleading with Reginald Fitzurse, Hugh de Morville, William de Tracy and Richard le Breton immediately before the murder. The details of their armour suggest that the painting was created in the reign of Edward IV (1461-83), possibly associated with the 300-year Jubilee of the saint's death in 1470.

Edmund was a ninth-century King of East Anglia murdered by the Danes in 869, and a symbol of pious and noble martyrdom. Although the centre of his cult was the monastery of Bury St. Edmunds (Suffolk), his appeal spread across England, and he was the favourite saint of Henry VI (1421-1471). 1469 or 1470 marked the 600th Jubilee of his death.

The South wall (from east to west, left to right) depicts
St. Catherine,
One of the most popular female saints of the period providing a female equivalent of the male saint's pious and patient suffering and sacrifice as well as an example of the knowledgeable Christian who debated with the Emperor Maxentius, his wife and his philosophers, converting many of them to Christianity. Her story fills the full expanse of the wall, in a series of cartoons read from left to right, top to bottom. Perhaps there was a guild dedicated to St. Catherine, who was particularly popular with young women.

Catherine's model as the knowledgeable Christian, familiar with the basic tenets of Christian faith, may also have been used in subtle ways by Pickering's parish priest to guide parishioners' attention to the other subject matter on the south wall. This included the depiction of the Seven, or Corporal Acts of Mercy (giving drink to the thirsty, food to the hungry, clothing the naked, sheltering the stranger, visiting the imprisoned and the sick, and burying the dead. These works were often contrasted with the Seven Deadly Sins in Lenten catechisms, for example.

The cycle of Christ's passion, Crucifixion and descent from the cross, Resurrection and Harrowing of Hell, and Ascension, were one of the most powerful devotional images of the period, and an important part of medieval teaching and preaching. At Pickering, the series commences with the Agony in the Garden of Gethsemane and concludes with the Entombment. Below, cleverly located in the spandrel of the arch is the Harrowing of Hell and the Resurrection, whilst above was the Ascension of Christ. You might just be able to make out a foot rising above the heads of the Apostles.

Together, these images speak to us of late medieval devotions and popular belief. They would have been used to illustrate sermons and support Lenten catechism, which was a requirement before receiving Easter communion. But one final - and possibly unique meaning of the paintings has also been decoded by Kate Giles and that is that they form a kind of calendar of the saints' feasts, from west to east, along the walls.

​We will post a link to her book here when it is published. 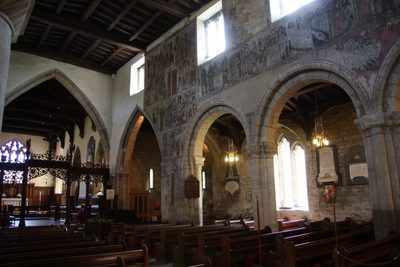 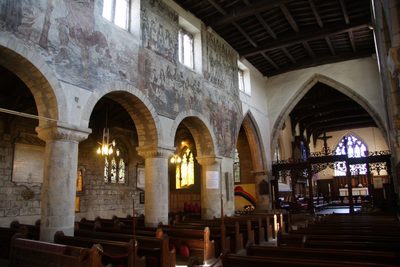 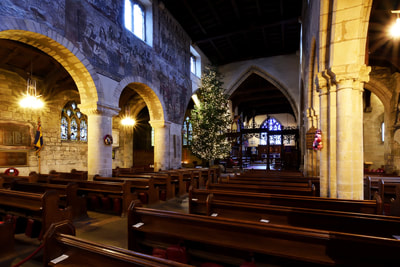 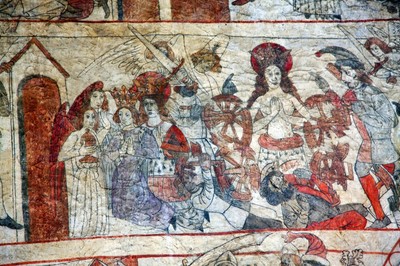 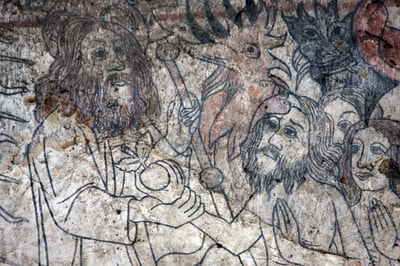 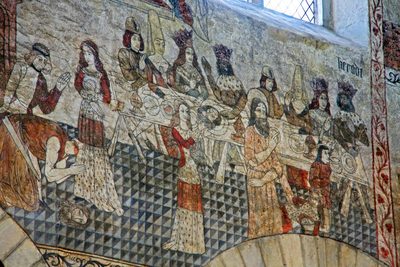 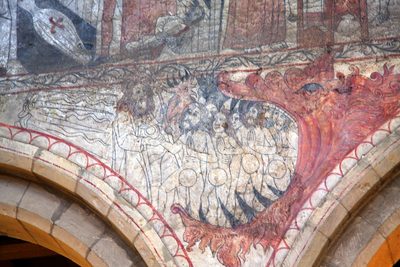 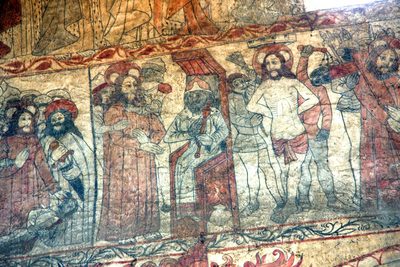 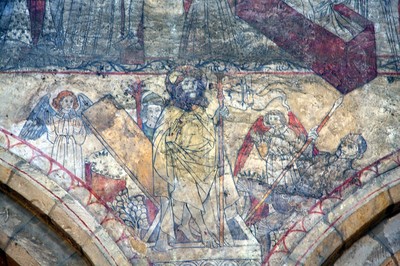 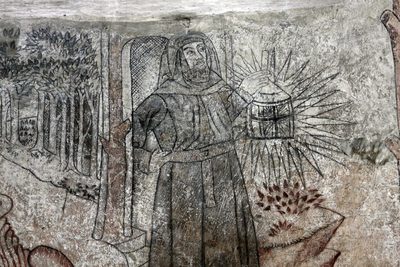 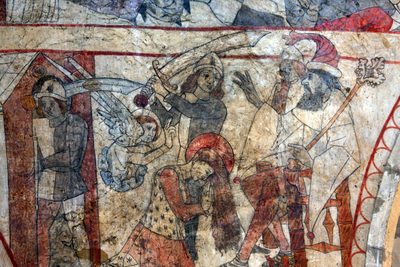 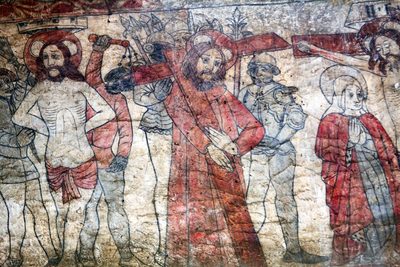 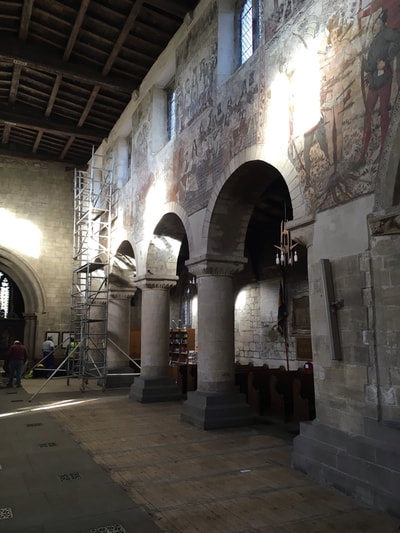 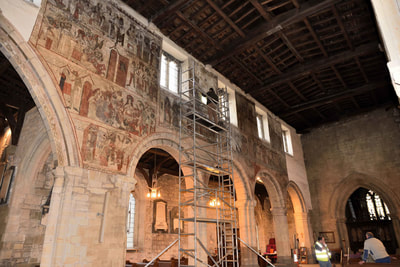 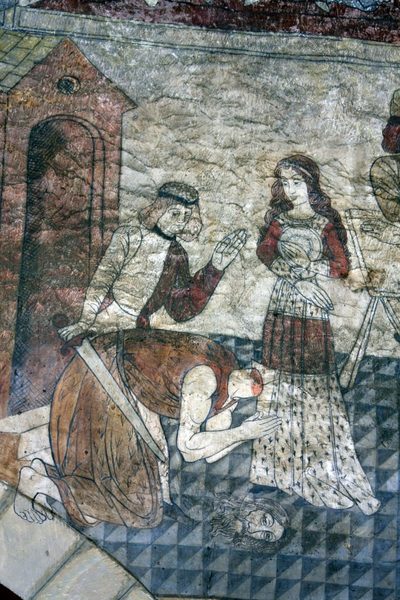